Many styles to choose from- get a MaBoRun here:

MaBoRun Minis: rolling marbles doing tricks as gravitational potential energy is converted to kinetic energy. Three mini marble runs each with a battery powered means of lifting the marbles: 1) a belt driven gear, 2) a scissor linkage that translates the rotation of the motor into linear motion to lift the marbles to the top and 3) an Archimedean Screw conveyer. Two of these runs incorporate a simulation of decaying orbits with conservation of angular momentum as the marbles whirl down funnel shaped tracks.

Thermobile: Nitinol wire loop heat engine- the memory wire straightens out when heated (contact with heat conducting brass wheel) causing the wheels to spin, providing mechanical kinetic energy from a cup of warm tea water. Swipe for a demonstration of Nitinol wire, a special alloy of nickel and titanium that can be trained to a specific shape at high temperature- bend it up at room temperature and it will snap back into shape when exposed to moderate heat such as hot tea water. This remarkable property is a type of solid state reversible phase transition known as a martensitic transformation.

This magnetic version fo Newton's cradle is no longer in production, but somtimes found on ebay:
From eBay: Search NOW: Magnetic Newon's Cradle

Magnetic Newton's Cradle: the famous collision demonstration reimagined with opposing magnets as the pendulum weights- shown here in two modes of operation. Initially the collision pattern looks similar to the traditional colliding spheres version but quickly goes chaotic- the magnetic field of each weight interacts with all the other magnets simultaneously making the system nonlinear. A 1990s desk toy by Fascinations- sadly no longer in production.

Get this 3D print here (your choice of colors):


Micro Racer in a Glass

These micro racer cars are sold under many brand names, and most come with a clear sphere to demonstrate this centripetal acceleration phenomenon.

I found this apparatus at American Science and Surplus many years ago. Follow the link below to find similar demonstrations of eddy currents and other electromagnetic toys and demos: 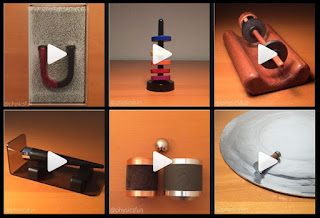 physicsfun shop:
Magnetic Toys and Demos
Coins and Eddy Currents: coins interacting with powerful neodymium magnets. Eddy currents are generated when conductors move near magneticfields- these currents then produce opposing magnetic fields. Coins that are made of good conductors fall slowly through the magnets (quarters, dimes, and pennies) and those made from poor conductors fall faster (nickels).

Click here for more on the PhiTOP and using magnetic induction to spin it up.

Tesla’s Egg of Columbus: a copper ellipsoid egg (PhiTOP) mysteriously spins and stands upright in this modern version of Tesla’s famous demonstration from the 1893 World’s Fair in Chicago that first showcased the principles behind wireless power transfer and his AC induction motor. Rotating magnetic fields from under the wooden platform induce electric eddy currents to flow in the copper PhiTOP- these currents then create their own magnetic field which oppose the initial fields underneath and pushes the PhiTOP to spin. This version differs from Tesla’s in that the rotating magnetic fields are created by, well, a pair of rotating neodymium magnets (revealed by lifting the top platform in this model). Credit to astrophysicist Kenneth Brecher, the creator of the PhiTOP, and this unique means of using a common lab magnetic stirrer to create the induced currents. Finally, the ellipsoid top stands up vertically (when spun with sufficient rotational velocity) due to physics similar to that of the tippe-top.

Created by Clemens & Christoph of CinkS labs: Available in a cube too!
From CinkS Labs: BUY NOW Universe Sphere

Universe Sphere: 380000 laser etched dots, each dot representing a galaxy of stars, reveals the largest scale structure of our universe. This glass sphere contains a 3D mapping of galaxies in a volume of our universe spanning 800 million lightyears in diameter, and shows the clumping and distribution as seen by automated telescopic surveys such as that found in the Sloan Digital Sky Survey data. Hold a chunk of the universe in your hand!

A DIY project to see if just shaking a bolt at the right frequency could make a standard nut rotate and fall off. Similar physics to the phase locking propeller toy featured in my last post. Motivated by videos seen on Instagram where a brass bolt is placed in magnetic putty and the nut mysteriously rotates up and off- now convinced that vibration is how that effect is produced. Here a small DC motor spins an offset mass to produce the vibrations.

I made this device from these components:

Check out these other Tensegity toys I've posted.

Tension Suspension: an interesting take on tensegrity where one heavy wire frame seems mysteriously suspended above another. This sculpture features strings (chains used here to make it look more dramatic) in tension equilibrium, with the top wire frame hanging from the bottom frame by the strand in the center, and the other three strands in tension to keep it from tipping over. This configuration is related to the concept of tensegrity invented by Kenneth Snelson and made famous by the architect Buckminster Fuller in 1949.

One of many creative illusions and curiosities of Victoria Skye. See her work here:

Impossible Arrow: an arrow made of wood through the center of standard steel hex nut. The arrow was carved and somehow placed through the nut- neither the wood nor the steel nut was cut or glued to produce this object. Not impossible, but creating this does depend on the use of some obscure physical properties of wood (similar to the impossible nail sculpture).

Jupiter Globe by Mova: rotating counterweighted globe sealed within a clear liquid filled acrylic sphere. The rotation is powered by light that shines through the semi-transparent Jupiter globe on to solar cells within the globe which drive a motor. But what does the motor push against to maintain the rotation? Believe it or not it uses magnets to push against the Earth's magnetic field like a compass needle. Wonderful physics of all kinds in the design of this clever device.

These fountains are individually made by the artist hence they are priced as art reflecting the labor involved:
From Etsy store of Stephen Co : BUY NOW
Aquarius Fountain Lamp

Aquarius Fountain Lamp: an oscillating stream of water is illuminated by strobe lights to reveal underlying structures and forms typically hidden from our vision. With the help of programmable micro-controllers, strips of addressable RBG LEDs are made to flash in sequences that make the water stream appear to move upwards, change colors, and split into multiple braided streams. Art meets physics and clever technology in this wonderful creation by computer engineer Stephen Co. With sincere appreciation to Stephen @northerncircuits for sending me one of his hand crafted high tech fountains.

Time's Up: inverse of the sandglass- tiny plastic beads are less dense than the water and thus ascend to the top of the container under the influence of a buoyant force in accordance with Archimedes' principle. This timer takes almost exactly 6 minutes to complete shown here at normal speed for the first half of this video, and the second half is condensed to 24 seconds in time-lapse.

The Swinging Sticks: a driven coupled chaotic physical pendulum as kinetic art where the placement of the rods' axes of rotation are engineered to exhibit the widest range of interesting motion. Four AA batteries and a simple electromagnetic kicker circuit in the base gives a tiny push to a magnet in the end of the large rod, keeping the system in motion for over a year! Perhaps one of the most famous physics toys out there as it was featured in the movie Iron Man II (sitting on the desk of Pepper Potts).

Get a globe and glow wand here:

Tricolor Plasma Globe and Glow Wand: an engineered mix of low pressure noble gasses exhibit three colors of glow discharge in the plasma filaments that rise upward due to heating. A separate glass wand has a different gas mixture and phosphor coated beads that glow when in contact with the globe. A small high frequency coil at center creates the high voltage potential between the center electrode and the metal coated glass globe. Current flow through the thin gas produces the colorful emission spectra from the gasses.